My eyes snap open and in the darkness I'm thrust into that strange post-waking state of being fully alert, but completely confused as to where I am.  It takes a couple of seconds to shake the fog of confusion from my mind.  Ah yes, I'm on Seahorse, halfway between Fuerteventura and Lanzarote, motoring into the wind and swell.  The first trip of our new boat.  I fumble for my head torch and check my watch in the red glow of it's night-vision preserving mode.  02:30.  I shouldn't be back on watch for another thirty minutes.

Anything out of the ordinary while offshore at night immediately grips me with a primal gut feeling of negative emotion and racing adrenaline.  On an as-yet strange boat that we know next to nothing about, the feeling is especially intense. 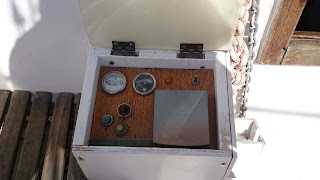 I slip out of my sleeping bag and poke my head out of the companionway to make an inspection.  The dash is a sparse affair.  There are a couple of gauges, a rusty key in the ignition with a green light next to it to tell you that the ignition is on, a faded yellow button that engages the starter motor, and a small orange light.  As Kate observed, this little orange light had started to slowly flash.  It's immediately obvious, despite the complete lack of markings, that this light is not flashing in celebration.  It's not telling us that we made a fine choice in the diesel we purchased and that the engine is running particularly well.  No, the engineer who decided to add this little light did so to tell us that something is wrong, but what?  My brain does a sub-conscious evaluation of the situation and lets me know the most probable issue.

"I think it must be the alternator.  Let's lift the hatch and have a look"

The engine is situated beneath the cockpit sole on Seahorse.  As Kate bent down to lift the floor panel, I was running through what we might find.  I was thinking that maybe the alternator belt had snapped or slipped off, or possibly a wire had vibrated loose.  What I definitely was not expecting, when Kate lifted the hatch off, was to be met in the face by an absolute torrent of water spraying out of the engine bay.

This trip wasn't going well.  We had only travelled about 40 miles in our new boat and now, in the middle of the night, she was sinking.

This was actually the second time we had to lift the engine cover in a hurry.  The first time was as we were leaving Gran Tarajal marina.  I had started the engine, checked I could engage forward and reverse gears, then Kate slipped the lines so we could leave our berth.  I reversed out, straightened her up using a bit of forward prop wash over the rudder and was now nicely aligned between the rows of boats, pointing towards the rocks at the edge of the marina with the open end of our channel behind us.  All I had to do was engage reverse again and motor straight back.  Nothing could be simpler, except that when I engaged the reverse gear, nothing happened.  RPMs increased as I applied more aft power, but it seemed that we were still in neutral.  I tried again and still nothing.  Now I was beginning to panic because we were being blown sideways, onto the row of boats opposite us.

We were in a right spot of bother.  We no longer had any lines ashore, there was no one there to take one if we wanted to throw one, and we were soon going to smash and scrape the bows and sterns of four or five boats.  The first thought that occurred to me was to jump in and swim back to our pontoon with a mooring line, so I could pull Seahorse away from danger.  The chances of succeeding in time seemed limited so I quickly dismissed the idea, ripped the cockpit floor up and in a last-ditch effort to save the day, stamped on the gear lever with my foot.

It worked!  We slipped backwards down the channel, engaged forward gear again and motored happily onwards, right up until the point when I was getting a face full of the Atlantic Ocean, gushing out of our engine bay.

I sprung into action, attaching the bilge pump handle and getting to work.  It is generally known that nothing is faster at emptying water from a boat than a scared man with a bucket.  It turns out that a scared man and a manual bilge pump works pretty good as well.

Upon discovering a leak, the first priority, instead of pumping, should be to discover where the leak is coming from and trying to figure out a way to stop it.  I couldn't easily inspect the area, however,  because the engine was running and it would be dangerous to lean down there, especially as the boat was ploughing through quite a large swell by this time.  I didn't want to stop the engine, because with the low voltage warning that was flashing, we probably wouldn't be able to start it again, so I just had to hope that I could pump the water out faster than it was coming in.

It soon became apparent that I could, and the water wasn't actually gushing in as fast as it had seemed.  A relatively slow leak had filled the engine bay to the point where the alternator belt had become submerged.  This had the effect of spraying water at high speed upwards, heavily dousing the alternator and stopping it from working.

Once I had pumped the water below the level of the belt, the apparent gushing stopped and it wasn't too long before I had cleared all the water.  Still being dark and dangerous to properly inspect the engine bay, we closed the cover and kept pumping every twenty minutes or so, to keep the water level down.

All the excitement of thinking we were going to sink had nicely displaced my other worry: was I going to be able to moor successfully when we reached Marina Lanzarote, or would reverse gear fail me again?

Thankfully, we did manage OK when the time came, although we hung around outside the marina until 08:00, when staff would be on hand to take our lines should we need it.


Once we were safely tied up, a friendly Dutch man came over for a chat.  He had recognised the boat, but was wondering where the owner was, not realising that we had just bought Seahorse.  The story about our trouble with reverse gear came out and he told me that the previous owner had experienced a similar problem, and had said that he was going to Gran Tarajal (where we bought Seahorse from him) to get the issue fixed.  Well I guess that after we approached him about buying Seahorse, he decided that it wasn't his problem any more.  Nice of him to warn us about it before we set off!  What with that, and the leak in the engine bay, it's no wonder that he made his excuses at the last minute and hadn't wanted to accompany us on the voyage from Fuerteventura to Lanzarote, which he had agreed to up until the point he had taken our money and we had paid the outstanding marina fees for Seahorse.
Posted by Alex at 12:00

You comment will appear only after it has been moderated i.e. Alex needs to click a button to accept it. If we're at sea, your comment might take a while to appear as we won't have full internet access to be able to do this.