Along the way, Alex has been getting out our video camera and shooting footage of some vaguely interesting events. Rain in Camaret, Dolphins in Biscay, Wind in Bayona... you get the picture. Now, for friends and family who haven't seen us for a while, these may be of interest. However, for those who have no desire to watch short clips of us on our travels, you may want to disregard this post.

We have managed to set up a very basic YouTube channel (quite a feat over slow WiFi and on a 7 inch tablet, I can tell you) to which we will be uploading aforementioned footage. There are currently three videos up there, with a fourth on the way. It is taking around seven hours per video clip though, so please bear with us; we may have difficulty uploading anything when we are in areas with even worse WiFi.

Anyhow, enough of the introduction - time to take a look for yourselves. The channel URL is www.youtube.com/mitchyboyandgirl - enjoy!
Posted by Unknown at 23:21 1 comment:

The Bay of Biscay


This post is a bit long, and very overdue.  We haven't had internet access for a while and have also been busy working on the boat.  If you don't fancy reading the novella below, the short of the long is that we crossed the Bay of Biscay, survived, and are now in Spain.  In fact, it has been so long since we left France that we're only a few miles from Portugal now.  For the full story, read on...

Kate has spent at least the last month learning all there is to know about the weather in this area.  She has been constantly studying pressure charts, learning about cloud formations and reading about what gives Biscay it's notorious reputation.  A seagull can't even sneeze in The Bay without it appearing on her radar.  Compared to Kate, the Met Office is nothing more than a bunch of balding men licking their fingers and holding them up to the breeze.

So, when Kate announced "we've got our window", there was nothing to do but haul up the anchor and set sail, safe in the knowledge that we would get to Spain with nothing but the fairest winds.  And we almost did.

We left in the darkness of the early hours on Saturday 5th October and unfortunately had to spend the whole day motoring, which we knew we would.  We decided that it would be better to spend a day motoring with no wind forecast, than to wait a day and risk getting too much wind.

The wind started to pick up on Sunday and we managed to sail for about half of the day, albeit rather frustrating in that it wasn't 12 hours of motoring followed by 12 hours of sailing.  It was more like 1 hour sailing, followed by 20 minutes bobbing about with the sails flapping in an infuriating manner as the wind died, hoping it would pick up again, then getting the foresail down, turning the engine on and motoring for an hour until the wind picked up, putting the foresail back up and the whole cycle started again.

With such light winds, the sea was incredibly calm.  It reminded me of one of those big dogs who barks a lot and looks ferocious, but just rolls over for a belly rub as soon as you get near him.  After hearing nothing but horror stories about crossing The Bay, we were pleased to actually find ourselves sitting in the sun on some of the calmest sea we have ever seen.

What we discovered is that the Bay of Biscay is full of dolphins.  I didn't even realise that so many dolphins existed.  We could look out to the horizon in any direction and see dolphin after dolphin jumping out of the water.  Literally any direction!  Lots of them liked playing around the boat, which was fun to watch, but also slightly scary as they swam really close to our rudder and I was afraid they might hit it and cause damage.  Kate wondered if they liked being back there so they could put their faces in the propeller wash, in a similar way to how a dog sticks his head out of a car window.  They were swimming so close all round our bow that I could have touched one if I leant out, but I didn't in case I invoked some until-now-undiscovered "dolphin rage" and set the pod into attack mode against us.


Whether my dolphin fear was founded or not, we had it easy.  We met a couple of funny Dutch guys who, while also crossing Biscay, had two huge whales swim alongside their boat for two hours, one each side.  They needed to make a course change, but couldn't, because they were afraid of bumping into a whale and angering it.  They tried slowing down, to trick the whales and then turning behind them, which almost worked, but just as they thought they were free, the whales re-appeared next to them.  They tried revving the engine, to scare the whales away, but didn't want to overdo it for fear of sounding aggressive!  In the end, they just had to wait until the whales got bored and left them alone.  Who would have thought that these would be the worries of sailors crossing Biscay!

Nightmares of dolphin attacks aside, we had an enjoyable three days out at sea with Kate mostly spending her time singing "Oh my dear, we're off to sunny Spain.  La viva Espagne...and we're taking the Costa Brava plane.  La viiiivvvvaaaa Espagne".  Neither of us knows what this song is.

Once we had sighted Spanish land, so close to being home and dry, was when the problems started.  The wind was beginning to pick up as I went off watch for the evening, so we put a couple of reefs in the main and dropped to our small, self-tacking jib.  It was blowing hard, but nothing that we hadn't seen before, so I went below decks to get some rest before my next watch.

I woke up with the mattress on our bed sliding backwards and forwards as we heeled hard over one way and then the next.  This isn't something that usually happens and was clue number one that the weather had continued to deteriorate.  Clue number two was the absolute howling racket that the wind was making through our rigging.  I jumped out of bed and stuck my head out of the hatch, into the jaws of a raging tempest.  The shock of emerging from the warm, still, cabin into this ferocious onslaught of wind, waves and noise was so strong that it took a few seconds to take in.

It was obvious that we had too much sail up at this point, so I chucked my oilskins on over my pyjamas and got out on deck to help Kate bring down the mainsail.  Once this was done, the situation seemed under control again.  We were flying along under our jib alone and now the helm wasn't being overpowered every time the wind gusted, so I went back below decks to try and sleep before my watch started.

Sleep, however, was not on the cards.  Firebird was still rolling by about 35° in both directions and occasionally getting knocked to more like 45°, so I lay in bed for a little while before going out to start my watch early.  It was clear that Kate was not enjoying herself up in the cockpit so I wanted her to be able to get into bed, have some rest, and hopefully feel more secure, protected inside Firebird's cosy little cabin.  I could tell that she wasn't having fun, because when I looked out at her, she was clutching the tiller for dear life, even though it was lashed centrally and our Hydrovane was steering the boat, she was soaking wet, and her little face was full with the most genuine fear that I have ever seen in anyone.

Even though I obviously wasn't going to enjoy myself out there either, I just hated seeing Kate so terrified, so I told her that I wasn't worried, even though I was, and tried to sound convincing.

The seas had steepened by this time and it was blowing Force 8 (gale force). The worst part was that the swell was hitting us almost beam on, which is really not what you want, as the ship will be at her most vulnerable.  To make matters worse, some of the waves were just starting to break and when one of those beasts hits you, you sure know about it.  As I sat there, cowering in the cockpit before the wrath of the storm, I summed up my options and decided that, for the present, we should continue as we were.

We were sailing on a broad reach (wind to port, roughly 20° off the stern).  To put ourselves on a better angle respective to the waves would mean either turning close hauled, which would not have been a fun point of sail at all, plus we probably wouldn't have been able to maintain that heading under jib alone, so that option was out, or turning in the opposite direction and putting us on a beam reach.  This wouldn't have been so bad, but it would have sent us out to sea, away from our destination, Coruna, and towards Finisterre.  I really didn't want to do this because, for one thing, I was sure that we would be getting shelter from the swell soon if we maintained our heading, once we could get the north-west tip of Spain between us and the rest of The Bay, and for another, if we continued going, we would hit Cape Finisterre, itself renowned for ferocious weather, so I would probably be putting us into worse conditions still.

And so it was that I sat, buffeted by the wind, soaked by the spray, peering out into the darkness for any other ships unfortunate enough to be out there with us, hoping that there wasn't a deadly breaking wave stealthily surging towards us out of the darkness, about to knock Firebird down.

When Kate popped her head out three hours later, reporting for her watch, I let her go back to bed as she had already had a terrible time on her previous watch and I wasn't going to get much wetter.

A further two hours later and we finally got the shelter that I had been banking on.  The swell died down as though someone had turned off a switch.  The wind was just as strong, but that didn't matter so much as we weren't getting knocked all over the place any more.  I woke Kate and went down to get a bit of rest before our arrival at Coruna.

By the time we did get to the marina at about 10am, just over four days after we had set out, it was as though the storm had never happened.  The sun was shining and we had to strip off our cold-weather sailing gear in favour of shorts, t-shirts and sun block.  Now that was more like it and is the whole reason for heading South, making the events of the previous night seem worthwhile.


As we were sitting in a cheap restaurant overlooking the marina, eating a delicious Spanish lunch, we were very pleased to see our new Dutch friends that we met at anchor at Camaret, Sanne and Marijn on Deinemeide, pull into the marina, having also made it safely across The Bay.

As for the balding men in the Met Office, I think they are safe in their jobs after all!


Photos from our dolphin watching: 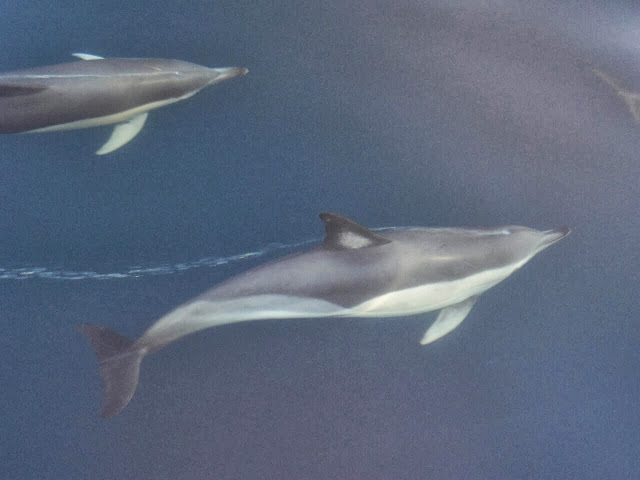 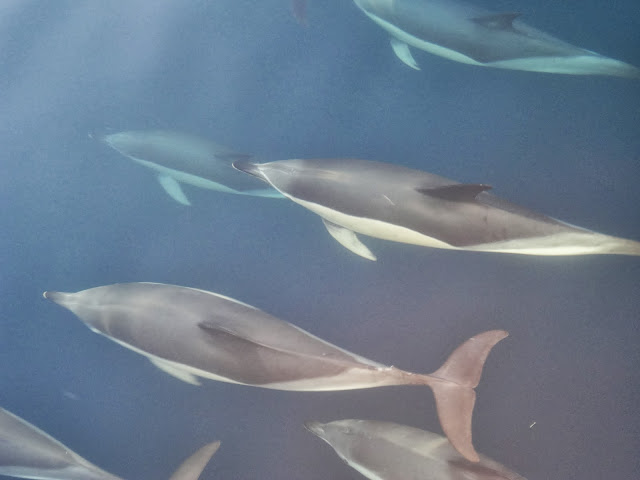 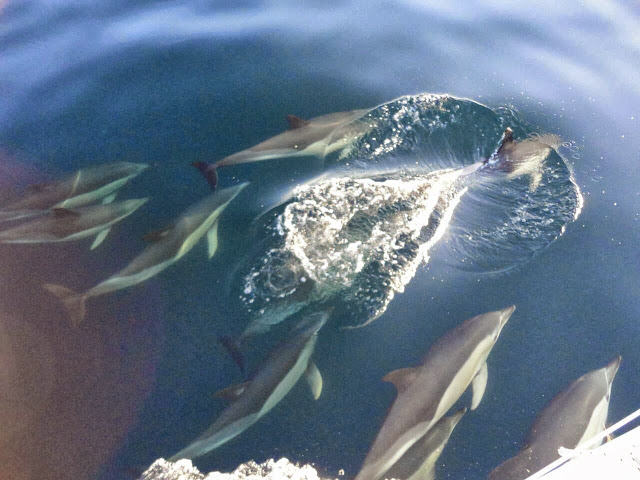 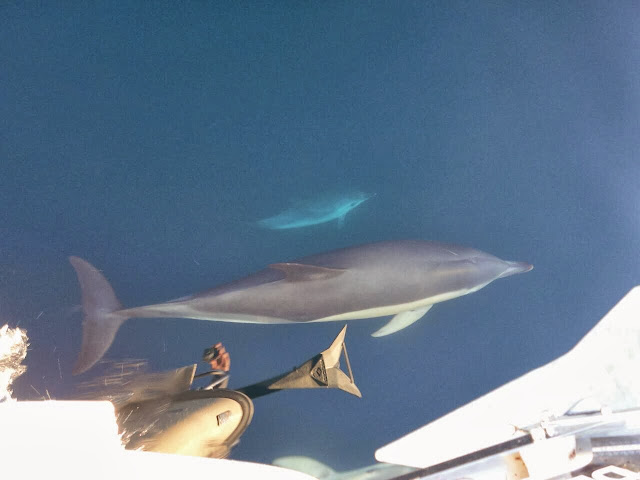 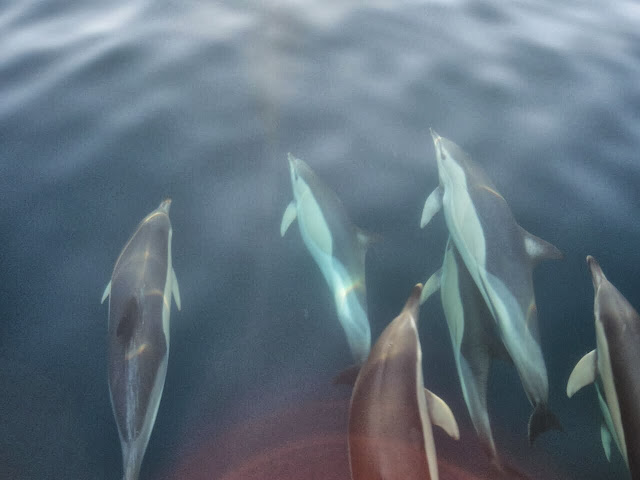 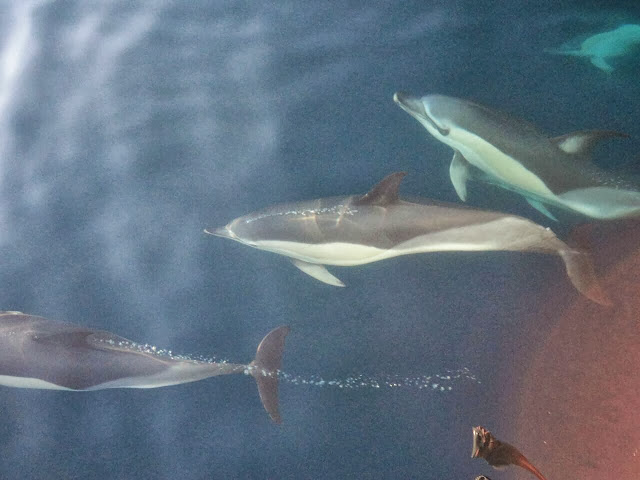