I have just finished reading a book about WWI submarines.  Thankfully, we're not hunting boats in the way that they used to, although there have been similarities.  In those early submarines, which had no way of filtering their environment, the air used to become repugnant after a lengthy dive.  Following a curry night, I have been running re-enactments in the interests of historical appreciation.  It turns out that Kate doesn't appreciate history much.

We have been making viewings of potential replacements for Firebird.  The objective is to find a really strong boat that can take almost any amount of punishment.

First we looked at our options in fibreglass.    It seems that a small hull would have more strength than a larger one. 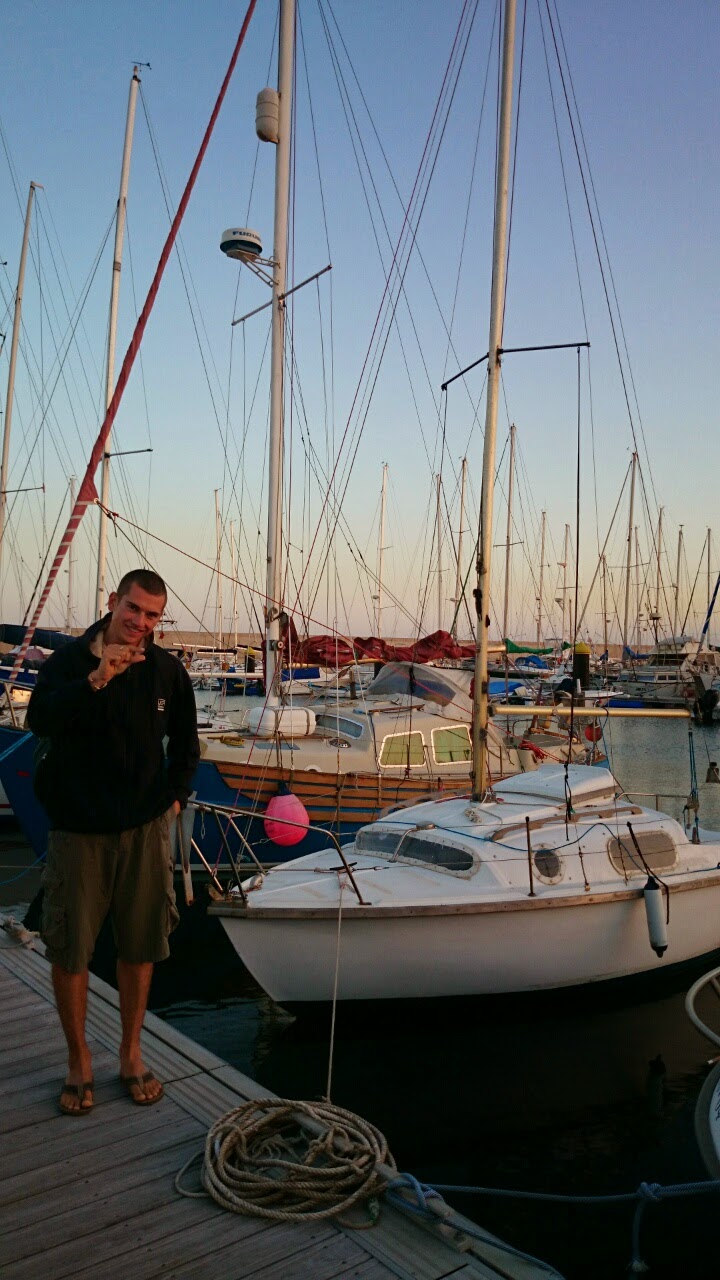 That being said, we decided that Kate would probably need slightly more space for her shoes and handbags, so we ruled out fibreglass.

We know the least about wood in terms of boat construction techniques, but we have heard that a well made wooden boat can tackle anything.  After all, Knox-Johnston's Suhaili sailed comfortably non-stop round the world and that was ages ago.

With so little knowledge of wood, we had to trust the sellers to tell us about the condition of their boats.  The owner of this one said that she only had cosmetic damage and would be as good as new after a lick of paint.  He seemed like a nice guy and we had no reason to doubt him. 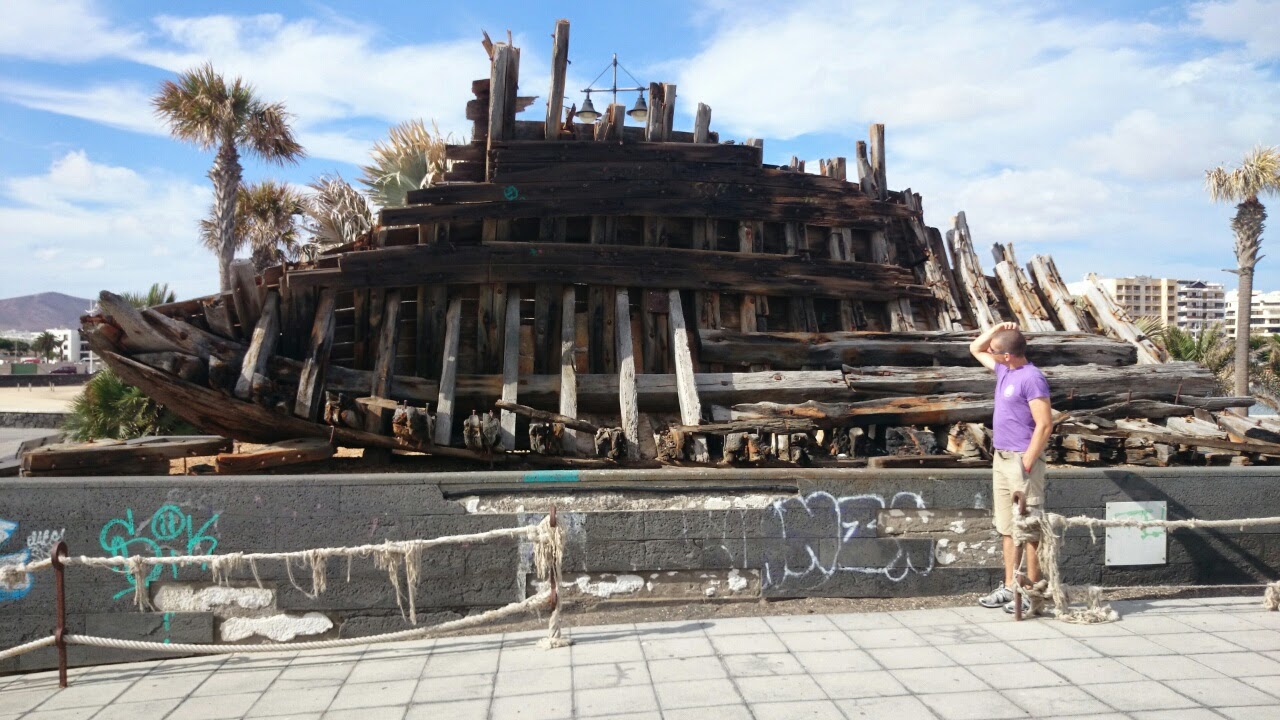 This seller told us that yes, there is a hole in the hull, but with wood, this doesn't represent a problem and in fact, we should think of the hole as a benefit by way of gaining a convenient way to fish. 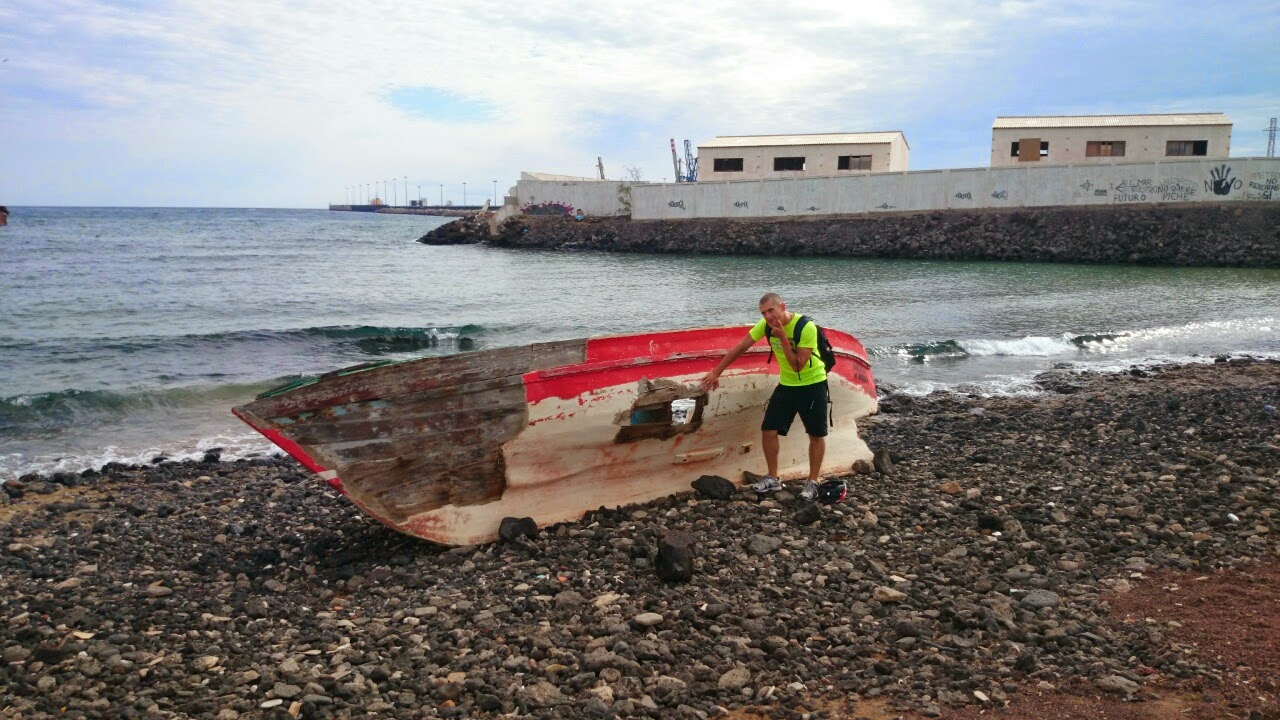 We then remembered that although Knox-Johnston had made it round the world in Suhaili, he also had to dive into shark infested water in order to carry out a repair below the water line which was causing his boat to fill with water.  Maybe wood isn't for us after all.

Now we're talking.  Aluminium boat owners will probably tell you that you may as well save yourself a lot of time and effort and instead of buying a steel boat, just buy a rusty old barbecue in which to burn your money.  I don't know what they think the problem with corrosion is.  We found this boat which was really spacious and rust hardly seems to be a problem. 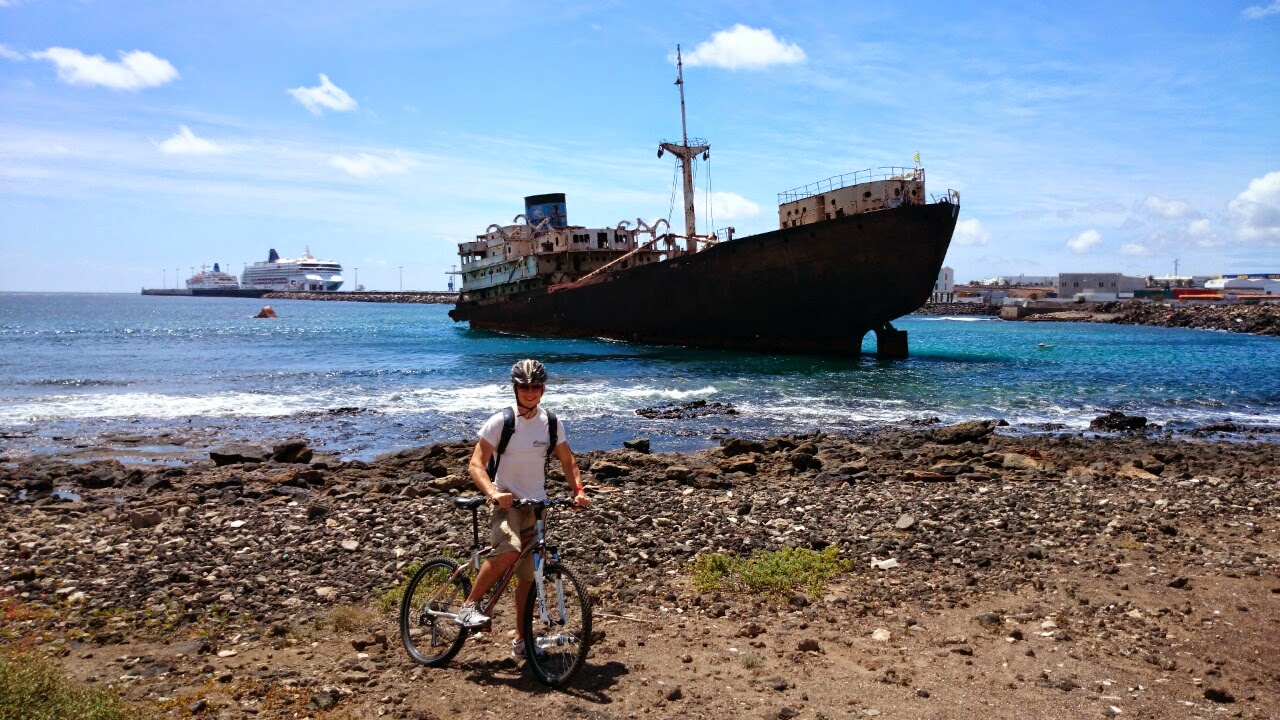 We have seen some fine vessels and the choice is going to be a hard one.  The search continues.
Posted by Alex at 12:41 3 comments:

After 2 years, 2 months and 2 x 2 days, our custodianship over Firebird has come to an end and it's time for her to continue her journey without us.  We haven't thrown in the cruising towel, in fact, it's quite the opposite and we're looking forward to continuing our trip more than ever.  It just won't be with Firebird from now on.

When we got metaphorically and physically shaken up in heavy weather between Portugal and the Canary Islands, we decided that we would never put ourselves in 'that' situation again.  What, however, was 'that' situation?  After a good long think, it boiled down to being scared that our boat was vulnerable to suffering serious, potentially critical damage by the conditions we were experiencing in open water.

This gave us three options:

Following a pep talk from our dear and trusted friends Warren and Faye, aboard Moonshine, it became immediately clear that options 1 and 2 were out of the question.  We enjoy living on a boat and the cruising lifestyle too much.  We wouldn't be happy being restricted to day sailing as we do actually enjoy the longer ones and the freedom of being able to go wherever we like in the world.  They even tried to convince us that option 3 wasn't necessary, but for us, it was.


Firebird is very well made.  We knew this and Warren, who has an encyclopaedic knowledge of boat design and construction, confirmed it.  As engineers have come to better understand GRP (Glass Reinforced Plastic, or fibreglass), manufacturing methods have improved, profit margins have become ever more important, buyers demand higher and higher performance, so hull thickness has decreased.  Firebird doesn't have this problem.  Built in 1985, she is old enough that her hull was over-engineered. 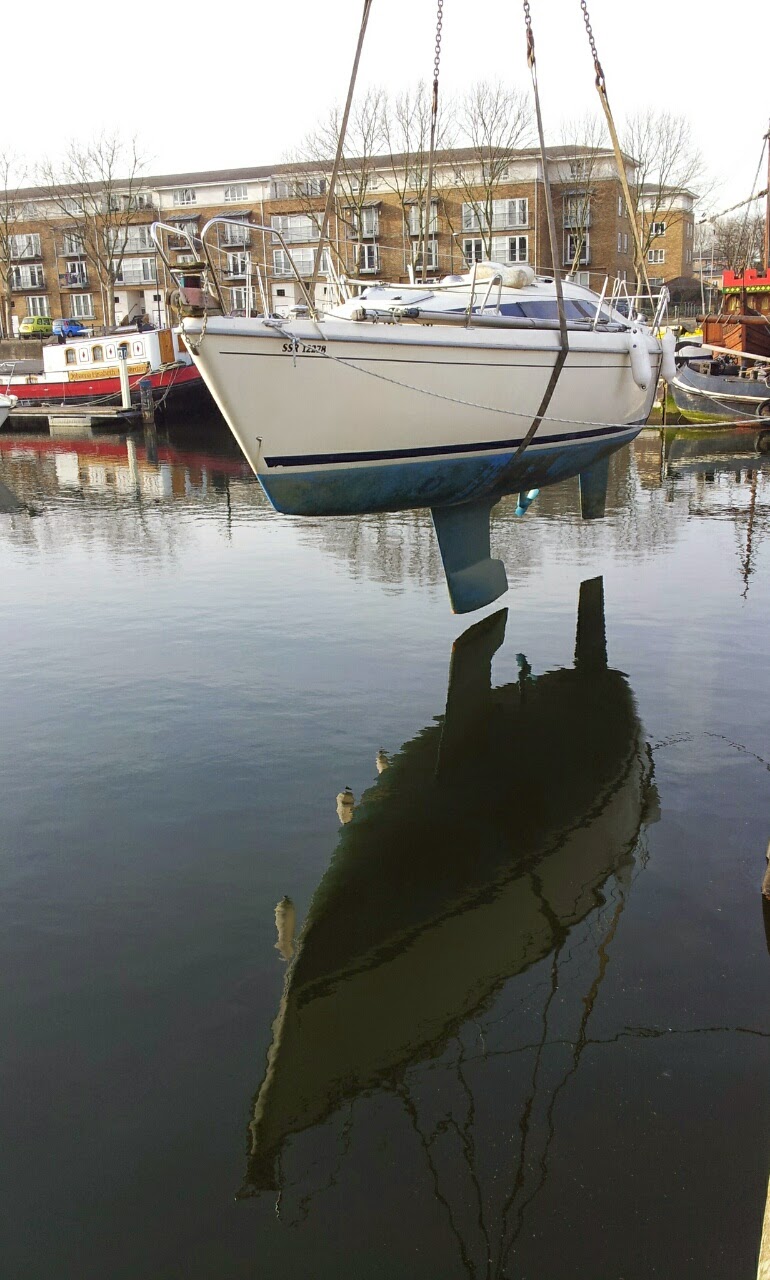 Even though Firebird is well made and can stand up to a great deal of punishment, we could never sleep soundly when cruising offshore, even when we weren't getting battered by a storm.  This wasn't her fault, it's just modern yacht design coupled with our cautiousness and active imaginations.  On the whole, design considerations seem to have leant more towards performance than safety these days.  This obviously doesn't mean that modern boats aren't safe.  Of the potential catastrophes that would be running through my mind while I was off watch, trying to sleep, most of the thousands of modern fibreglass yachts that sail across oceans each year don't experience any.  On the other hand, sometimes they do, with tragic consequences.  Maybe we were about to be the one boat per decade that runs over a floating whale carcass that forces the keel up through the hull.

Some people think we're crazy for worrying about Firebird letting us down, but it just turns out that sailing offshore with a spade rudder, fin keel, saildrive and no redundancy in the rig isn't for us.  I imagine that the biggest causing factor of loss of yachts has nothing to do with their design and is more likely due to poor seamanship and navigation.  Although we can try to rationalise the risks as much as we like, what ultimately matters is whether we drop off to sleep when our head hits the pillow while under way.  So we decided that poor Firebird, who has served us so well over the last couple of years, had to go.

Actually selling her was an unbelievably painless process.  We were imagining that, especially in the current second hand boat market, it would take a long time and we would almost have to give her away.

Kate put an advert on Milanuncios, the Spanish Gumtree equivalent (if you don't know what that is either, Mum, it's essentially an online classifieds section).  She did this a day or two before we set sail from Fuerteventura to Tenerife.  The advert ambiguously said that Firebird was "in the Canary Islands".  Unbeknownst to us, while we were sailing  to Tenerife, we received an email from someone called Saul, replying to our advert.  He wanted to know where Firebird was, for a viewing.  Guess where Saul lived?  Tenerife!

Saul even wanted to keep Firebird in the marina that we were currently in.  He had been looking for a replacement yacht since he sold his previous one three years earlier and hadn't found anything that he liked.  It was meant to be!

To cut a short story shorter, Saul bought Firebird and we signed her away a few days after David and Pauline had flown home.  We couldn't very well sell our home from under ourselves while we were supposed to be receiving visitors!

I think that both parties were happy with the final price we agreed on and Kate and I were really glad that Firebird will have a great new life in Tenerife.  Saul is a really nice guy and a very competent sailor as well as being handy when it comes to the maintenance side of things.  He has been keeping us updated with the work he has been doing to keep Firebird looking her best.  He doesn't currently have any plans for sailing further afield than the Canaries, but you never know what the future holds and in any case, we're sure that Firebird will be more than happy to live in the sunny Canary Islands where there will always be plenty of wind to fill her sails.  We wish Saul and Firebird many happy years together and, of course, fair winds.